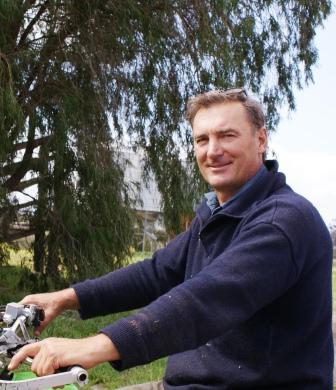 A prime lamb breeding formula using SAMMS over Merinos then White Suffolks over F1 ewes has continued to prove a winning combination for Phil and Ingrid Anderson of Uranbah Estate, Tambellup.

A line of 176 old-season's lambs averaged 23.7 kg and returned $109.53 per head including skin under a minimum price contract to take WAMMCO’s Producer of the Month title for August, 2013.

The same formula won Uranbah its first Producer of the Month title in September, 2007.

Phil said his aim since changing Uranbah from Merinos to prime lambs in 2003 had been to 'shoot for the gap' with lamb deliveries between old and new seasons, and the policy continued to pay dividends. Ewes producing lambs for WAMMCO are mated from mid-March and dropped from mid August, before being shorn and carried through the summer on stubbles with some supplementary feed if necessary.

"We managed to sidestep disaster by selling most of our 2012 lambs just before last year’s significant price fall, and this year we were happy to sign a minimum price contract with WAMMCO back in May/June, that has seen a total of 1007 lambs, - including the winning consignment - average 26.45 kg to return $115.62 per head."

"We were lucky with a red hot start to this season with green feed into the summer and top conditions all the way through."

Some of the lambs in the winning consignment returned up to $125 per head and nearly 70 percent of them would have attracted a bonus under the former WAMMCO Select parameters.

He says there has been a steady improvement in ewe fertility and lamb survival rates on the property.

He has kept total breeding flock numbers at about 1400 and the ratio of his enterprise at 60 percent crop-40 percent livestock (ewes lambs and Red Angus cattle.)

"We believe the switch from wool to meat back in 2003 was a timely one and we are optimistic about the future, particularly for lamb."

He is also happy with the performance of his SAMMS under a fairly wide range of conditions and believes the White Suffolk continues to make a worthwhile contribution.