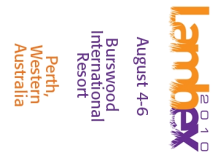 A collaboration between industry, government, processors, universities and Meat & Livestock Australia was brought to fruition today (Tuesday, January 19), with the ministerial launch of LambEx 2010 – a national lamb industry event to drive the future profitability of the industry.

WA Minister for Agriculture & Food, Forestry Terry Redman joined senior representatives of the lamb, processing and live export sectors to inspire confidence in the future of the Australian lamb industry via a large scale industry showcase at Burswood from August 4-6 this year.

The Ministerial support of the initiative was been welcomed by LambEx chair and project initiator Dawson Bradford, of Hillcroft Farms, Narrogin.

“Our vision for LambEx is that it must bring together every sector that has capacity to influence the long-term viability of the Australian lamb industry – a successful industry that is at risk unless there is a united approach,” Mr Bradford said.

“LambEx is all about bringing people together – including sectors that have not necessarily in the past been that collaborative – and linking them in an inspiring and thought-provoking event.”

Mr Bradford said that a key target for LambEx will be to attract producers, who for various reasons have exited the sheep industry, and woo them back.

“We need to re-instate confidence in sheep and lamb production. All sectors of the chain need to be profitable and to achieve that in today’s market we need collaboration and motivation.”

Central to the creation of the LambEx 2010 is the support of Meat & Livestock Australia.

According to MLA Director and LambEx steering committee representative Peter Trefort, MLA is proud to be a major sponsor of LambEx 2010 to inform and motivate sheep and lamb producers to drive the future success of the industry.

“Right at the very core of a viable lamb industry is our ability to deliver a product the world needs, but also in our ability to continually improve our farm production systems so that we can optimise our returns,” Mr Trefort said.

“I urge all primary producers – those in the industry as well as others looking to get back in – to make the most of this opportunity to gain valuable insights and information to meet their individual business goals and contribute to a secure future for the whole sheep industry.”

The LambEx program will comprise a two-day conference, a ‘Grands-Lamb’ dinner and a comprehensive trade show – all of which will take place at the Burswood Entertainment Complex.

Mr Bradford said that the intention is that another state should carry the mantle of LambEx in 2012 and build on the profile and opportunity the inaugural event will create.

“This will be a truly national event – the content of the program aims to be highly educational and challenging. We want our delegates to go home having heard and met people whose ideas are new and different, and to be motivated to do something in their business as it relates to the production of sheep.”

It is anticipated that the program will be released in early April, while trade exhibition booths and sponsorship positions are now available for purchase.

LambEx 2010 is managed by Esther Price Promotions (EPP).  For all inquiries, please contact the EPP office on 61 8 9525 9222 or email Esther Price esther@estherprice.com.au