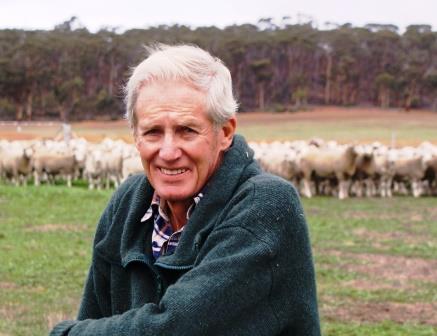 Dawson Bradford, one of Australia’s most decisive and dedicated meat industry leaders, retired at today’s annual meeting, after 15 years as Chairman of the WA Meat Marketing Cooperative Limited.

The AGM declared an annual profit of $10.5 million on turnover of $286 million, before payment of pool bonuses to producer members totalling $3.6 million.

On top of offering attractive prices to lamb producers at the point of sale during 2014/15, the Cooperative also disbursed a trading bonus of 40 cents per kg on lamb and 20 cents on mutton, to producers in August this year, taking total rebates over the past three years to $9 million.

Regular stability for producers in the shape of sound prices for their stock and solid pool rebates are all due to the early commitment of Dawson Bradford, his fellow directors and key staff.

Mr Bradford is recognised for guiding the successful formation of the first new Australian producer-owned meat Cooperative, after many similar livestock producer-owned Cooperatives across Australia had failed years in recent years.

Under his clear direction, WAMMCO not only changed the culture of sheep and lamb processing and marketing in WA, it settled the State’s lamb industry into a mode of solid, stable returns based on heavier, higher quality animals and a lucrative new chilled lamb demand in the United States.

Without these new incentives to bring higher value meat into the sheep breeding equation, it is doubtful that WA’s lamb industry could have arrested its serious decline after the collapse of the Australian wool industry and regular droughts.

Mr Bradford was one of nine producer and professional directors appointed by the Court Government in 1999, to manage the merger of the former statutory Meat Marketing Corporation with the newly purchased WA meat processing operations of Metro Meat International into the formation of a grower owned meat processing and marketing Cooperative.

Bringing the two unmatched, outmoded business interests together, with relatively no underwriting from the State Government, quickly pushed the new Cooperative to the edge of bankruptcy.

Dawson Bradford became chairman of the Cooperative in December 2000 and set to work with former Metro Meats State Manager Des Griffiths and deputy chairman Max Cameron and key consultants to ‘save and salvage’ the project.

He was quick to see that New Zealand’s successful Alliance meat Cooperative should become a benchmark for the WA operation, and established early dialogue with his Kiwi counterparts. It was this trans-Tasman Cooperation that helped to shape a new lamb industry in WA, and led to vital exchanges on technology and management, as well as global marketing.

Alliance also endorsed WAMMCO’s early membership of the Australian and New Zealand Lamb Company — a consortium of Australian and New Zealand processors — set up to co-ordinate sales of prime, heavier lamb from the southern hemisphere into North America. This giant market has consistently accounted for around half of annual WAMMCO sales, underwriting major advances in chilled lamb processing and value adding.

These initiatives also enabled WAMMCO to reconfigure WA’s lamb supply pattern from an over supplied spring kill to a more orderly year round flow of lamb to the works.

This vital change ensured supplies to customers as well as, and most importantly, offering employment certainty to the Cooperative’s 350 Katanning workers.

Dawson Bradford also set a cracking leadership pace in improving WA’s genetic and management standards. His Hillcroft Poll Dorset stud at Popanyinning remained a national leader until sold in 2014. His efforts are now focused on the development of a new meat breeding sheep he has named the UltraWhite, which will help fill the need for an alternative to wool producing sheep for lamb production across a wide area of Australia.

The appointment of New Zealand meat industry executive Coll MacRury following the retirement of Des Griffiths as WAMMCO’s CEO in 2008 continued to strengthen the position of the Cooperative.

In 2010 MacRury, along with the Chairman and Board, brokered a highly successful lease arrangement of Southern Meats at Goulburn in NSW, followed just two years later with the purchase of this highly regarded sheep and lamb processing facility.

The outgoing chairman regards this as one of the most significant moves during his 16 years as a foundation director.

“It added critical mass to the WAMMCO business enabling better access to markets for the Cooperative whilst also increasing the security, mass and flexibility of the business by spreading its geographical footprint over a greater area of Australia,” he said this week.

The seasonal and supply synergies of the West and East Coast lamb and mutton operations has been a major contributor to WAMMCO’s stability and success since 2011.

With the strong support of his chairman and the Cooperative’s board and staff, firstly Griffiths and then MacRury have overseen the constant major upgrading of the Katanning and now Goulburn processing plants to the best of world standard.

Dawson Bradford’s contribution to the livestock industry was recognised by Murdoch University in 2010 with the bestowing of an Honorary Doctor of Science and by his induction into the Western Australian Royal Agricultural Society Hall of Fame in 2014.