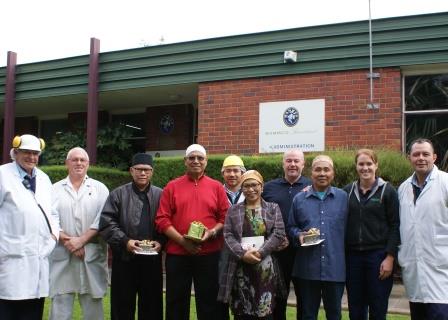 Another group of four Cocos and Christmas Islanders who moved with their families to Katanning in the mid-1970’s, soon after the town’s export meatworks was established, recently retired after serving up to 38 years with successive owners of the plant, - Southern Meat Packers, Metro Meat International and WAMMCO International.

The unique Katanning community peaked at around 400 former islanders and their families and has since stabilised to around 300 people, many of whom remain employed by WAMMCO.

Maria Nickery, Aklie Laurie, Abdul Raman Sawell and Baldie Mitchell were described by WAMMCO’s Katanning manager Tony Bessell at a recent farewell as loyal, industrious workers whose example and personalities had helped to shape the unique ‘culture’ of both their community and the business.

He said Aklie Laurie arrived in Katanning from Christmas Island in 1976 and was a prime mover in establishing the town’s mosque in 1981, with then Malaysian President, Tunku Abdul Rahman as an early visitor.

Aklie had continued to serve as an ‘elder’ within the Islamic community and intended to stay in Katanning for his retirement. He had also served as plant supervisor for Halal slaughter procedures, - an essential role setting standards that greatly assisted the company to develop key middle Eastern markets for processed meat product.

Maria Nickery was 15 and remembers the cold contrast of coming from Christmas Island to Katanning with her parents and five brothers and sisters, soon after the Island was taken over by the Australian government. She joined her father and a brother at Metro Meat in 1988, working her way from the offal section, through to the boning room before becoming an accredited QA Officer for WAMMCO four years ago. She has two daughters living in Bunbury and Australind. She is also staying on in Katanning and has already started a new career at the Katanning Hospital.

Aklie Laurie remembers the sheep, cattle and pig chains operating at Southern Meat Packers when he arrived in 1976 after being recruited with two brothers and a sister on Christmas Island. His family was originally re-located from Cocos Island to Christmas Island, and he was 27 years of age and had married in Singapore. He and his wife have three children with families happily established in WA.

He remembers a turbulent period of industrial action at Katanning under Metro Meat ownership, when workers at the plant were involved in picket lines and major demonstrations against the company’s live export business.

Abdul Raman Sawell started at Katanning with Southern Meat Packers in 1977. An orphan, he had married Baldie Mitchell’s sister Yehrita on Cocos Island, and remembers the help he and his wife were offered by islanders who had moved to Katanning from 1974. His career at the Katanning plant started in the skin shed, moved to the boiler room and then to the boning room where he remained until his recent retirement. The couple have two daughters, living with their families in Bunbury and Singapore.

Baldie Mitchell was also recruited on Cocos Island and was 25 years old when he arrived in Katanning in 1977. He met his wife Jayoh in Katanning and the couple have a son living in Perth.

He started as a chiller hand with Southern Meat Packers at Katanning, moving after six years to the freezer room before terms in the by-products, skins, lairage sections and finally on the slaughter floor. A return visit to Cocos Island is an early ambition of his retirement.

Like his fellow retirees, Baldie has welcomed the past fifteen years of industrial peace in the meat processing industry.

“It is very different and much better today,” he said.