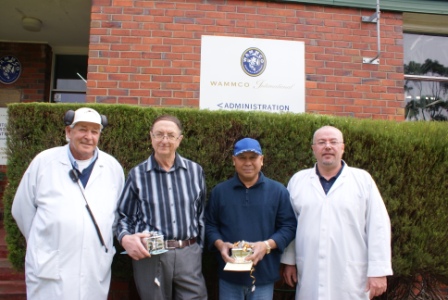 WAMMCO International has farewelled two of its longest serving employees, Christmas Islander Amalan Alna and Polish refugee Richard Carson who both retired on June 30 after more than 30 years with the group.

Amalan, alias “Ammo” was 16 when he came to Australia in 1976 to work as a freezer attendant for the original builders of the Katanning processing plant, Southern Meat Packers.

His wife Saminah, retired after 34 years in the Katanning boning room in 2011. The couple have two sons, one of them also working at WAMMCO.

A boiler attendant in Poland, Richard Carson obtained refugee status and was 35 and unable to speak English when he came to Australia via the Australian embassy in Vienna with his wife Helena in 1981.

He won a job with Metro Meat at Katanning a year later and quickly specialised in the boiler and refrigeration sections of the engineering department. He played major roles in the installation of new boilers and their subsequent supervision at WAMMCO two years ago, and in the computerisation and monitoring of the refrigeration facilities since 1995.

"It is unusual these days to find employment for a lifetime with the same company and we have enjoyed working with Metro and WAMMCO and living in Katanning for just over 30 years," Richard told a recent retirement gathering at the plant.

WAMMCO’s Katanning Manager Tony Bessell said Richard and Amalan not only represented the long standing cultural diversity of the Katanning plant, but were also fine examples of an outstanding work ethic.

"They have both always been entirely reliable, loyal and industrious and WAMMCO applauds and greatly appreciates their outstanding contribution," he said.