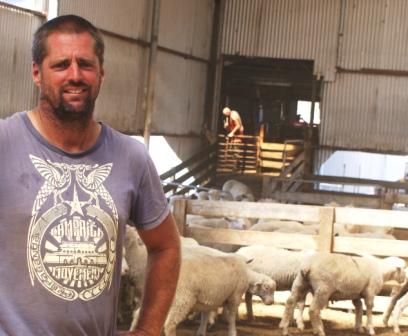 A high WAMMCO Select score on 65 of the 113 cull ewe hoggets processed for Kojonup ram breeders Tim and Steph Stevenson on December 22, did more than assist the couple to win their first WAMMCO Producer of the Month title.

Tim said the 113 May/June drop Poll Dorset and White Suffolk ewe were culled from the breeding program on Kaula Dale after muscle scanning showed they did not meet his EBV criteria.

“The fact that our culls achieved a high WAMMCO Select score was confirmation that our breeding policy is on the right track,” he said last week.

WAMMCO’s December 2011 Producer of the Month winning consignment from Kuala Dale consisted of 113 ewe lambs with an average weight of 22.67 kg that returned an average $114.99 per head with heavier lambs paying up to $155.92 per head.

A dedicated young sheepman, Tim moved to Kojonup from Bolgart about ten years ago and now runs a 2000 ewe stud breeding program.

He began breeding SAMM and Suffolk rams at Bolgart, also including White Dorpers, White Suffolks and other breeds before taking over Perry and John Jasper’s “Jolma” Poll Dorset stud at Cunderdin two years ago.

He will also be hosting a genetics and lamb production information day in conjunction with WAMMCO at Kuala Dale, south of Kojonup on February 15.

He follows a policy of identifying and selling rams on their genetic potential rather than their breed, at a starting price of around $400.

“We are selecting and breeding rams for specific areas and for specific local and export processed lamb or live export markets,” he said.

“Scanning enables us to see the good as well as the bad and I believe that it is encouraging more producers to care for their sheep,” he said.

Agronomist Paul Omodei is working with Tim on grazing and fodder pastures to maximise livestock production on the 800 hectare Kojonup property and they are also looking at grazing patterns and other production tools to integrate the 300-400 ha annual canola/cereal cropping rotation.

Tim sees the role of WAMMCO continuing to be critical to the future of WA’s lamb breeding industry.

“They have shown the lead in rewarding lean meat production, and in value-adding to enable profits to be passed on . Global supply/demand factors will continue to dominate the price of sheepmeats for the short to medium term.”