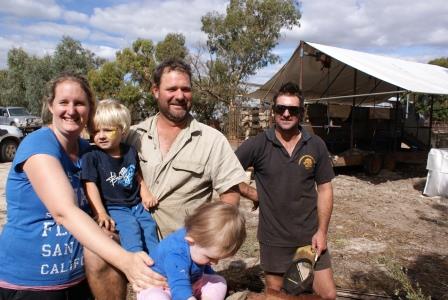 Two branches and several generations of Corrigin’s Poultney family have combined many years of sheepbreeding experience in a SAMM/Dohne/Merino prime lamb partnership that has won WAMMCO’s Producer of the Month award for March 2015.

Andrew and Craig sharefarm Ross’s 2,900 ha Corrigin property under an agreement that includes his SAMM/Dohne/Merino ewes and rams.

The winning Producer of the Month consignment consisted of 157 lambs that were processed at Katanning on March 6 and averaged 22.1 kg to return $119.94 including skins.

The Poultney brothers said they were pleased that nearly 64 percent of the draft met WAMMCO Select specifications, with individual lambs reaching a top of $146 per head.

Despite an excellent cropping season, later lamb drafts including the WAMMCO award winners were finished on a lupin/hay mix via self feeders, when stubbles shut off early.

"We take a close interest in the processing feedback from WAMMCO, and would welcome the return of an expanded WAMMCO Select accreditation incorporating taste. tenderness and other characteristics," Craig said.

Harold Poultney shared an early interest in dual purpose Merinos through his membership of the Australian Merino Society and its later Performance Bred extension, and his sons have maintained an interest in merinos.

Ongoing depression in the wool market and brighter prospects for lamb and shipping wethers, tempted him to purchase five South African Meat Merino rams at the Northam ram sale in the late 1990’s with two more from Peter Jensen at Pingaring in 2010. Doehne ewes were added to the mix in 2011.

SAMM rams bred from this base and classed mainly on size, enabled him to produce up to F4 SAMM/Merinos, but he still buys in Claypans blood ewes for their size and wool quality.

Andrew and Craig have no plans to expand the sheep operation. They believe the prime lamb side of the business is optimised at around 2,000 ewes, fitting well with their enterprise ratio of 60 percent cropping and 40 percent sheep.

They have an ongoing policy to maintain a good clover/medic base in pasture paddocks kept for lambing and weaning.

With an average 100 percent annual lambing , the partnership has been sending most of its prime lambs to WAMMCO at Katanning with consignments and bookings weighed and arranged by Tony Douglass of Elders Corrigin.

They aim to sell their annual crop of lambs at a minimum of $100 per head , and if necessary, will risk higher holding costs to keep lambs back.

The family hold WAMMCO shares to secure their processing entitlements at Katanning and welcomed the cooperative’s record rebate in October last year.

"The income from sheep is always timely and will keep us in the game, - provided lamb prices are sustained and there is no further disruption to the live sheep trade, or bans on mulesing," Craig said.

Andrew’s wife Emma and their children Taj and Paige were on site to help with the crutching of wether lambs last week. Craig and his wife Georgie have a four month old daughter Sophie.

Good opening rains and some follow-up last week have set early hopes for another good 2015 season in the Corrigin area.