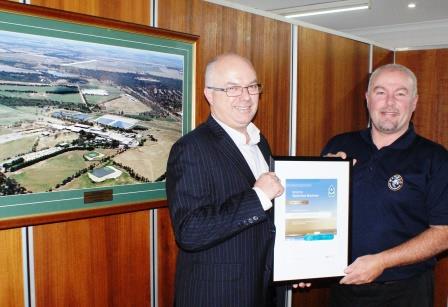 The Water Corporation has recognised one of its biggest corporate consumers with an award for water conservation.

WAMMCO International, WA’s leading processor and exporter of quality lamb and sheepmeat is now also officially recognised as a leader in saving water.

The Award, recently presented to WAMMCO’s Katanning Manager Tony Bessell by the Corporation’s Great Southern Regional Manager of Customer Services, Andrew Kneebone, records that the producer owned cooperative reduced its water consumption by 14 percent or 42,500 kilolitres between December 2012 and 2013.

Tony Bessell said the reduced consumption was achieved in a period of high volume production and was equivalent to 7-8 weeks of supply.

“When our annual water bill represents such a significant processing related cost, there is a strong incentive for WAMMCO to minimise its water usage,” he said.

“WAMMCO entered a supply partnership agreement with the Water Corporation 15 years ago and built two extra dams on its property to store scheme water during the summer months as a further cost saving mechanism.

“We also employed a plumber on site with an express charter to eliminate water wastage and to find better ways to conserve water,” Mr Bessell said.

“WAMMCO has been proactive in its choice of water efficient technology, from the latest processing equipment such as water frenching units and recycling processes, through to the spray nozzles and other devices we use.”

Mr Bessell said Katanning did not have the advantage of being able to draw on underground water reserves.

“Having to maintain potable water supplies to a high standard, using scheme water from a local Corporation storage via our own dams, has presented special challenges and confirmed the value of our long partnership with the Corporation.

“Our current 15 year agreement is due to expire soon and we are looking forward to continuing with an arrangement that again guarantees a quality supply at a stable price,” he said.