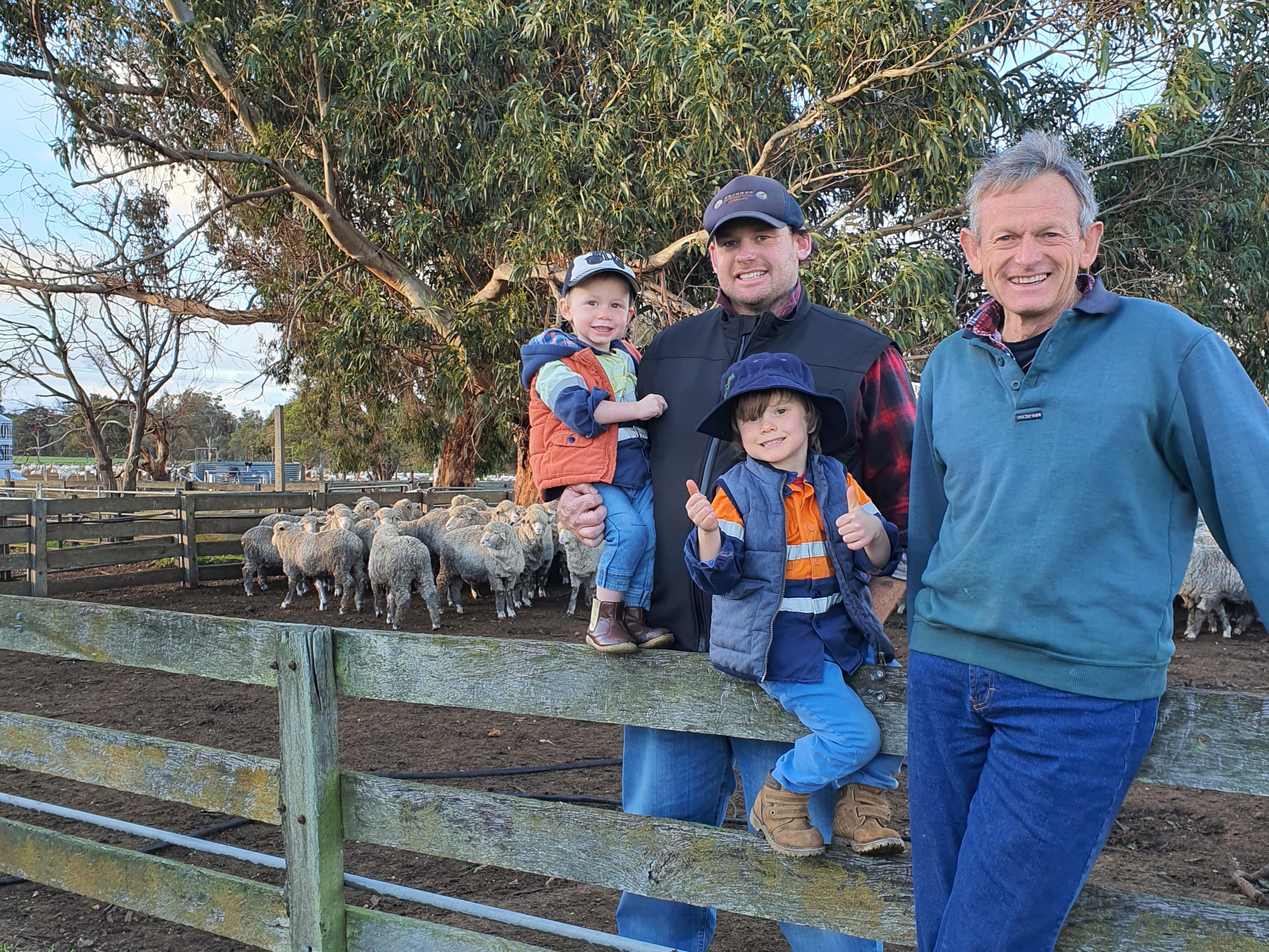 When WAMMCO asked its June 2020 Producer of the Month winner Roger Bilney of Kojonup to nominate the most significant example of technological change in the livestock operation of his family’s farming business, he replied “genetics.”-

Prior to 2010 the Forts Valley family partnership of Roger, wife Maree and sons Adrian wife Nadine, Matthew and Laura and Bradley and Aimee, was focused solely on wool cut per ha. Higher lamb and sheepmeat prices dictated the shift to a combination of high performance Merinos from Billandri and Sherwood terminal Poll Dorset sires.

In 2019/20 meat accounted for 62 percent of livestock gross income.

A line of 112 Poll Dorset/Merino cross lambs from the Bilney family’s Kojonup feedlot confirmed 10 years of evolution in the crossbreeding program by taking out the award for WAMMCO’s Producer of the Month for June by averaging 23.78 kg and returning $190.24 per head with 98.21 percent meeting the premium.

The winning line was the last from the feedlot for the season and comprised the lightest lambs to leave the feedlot during the season.

But even as WAMMCO was making the June award, Livestock Manager Peter Krupa was working with the Bilneys on a new contract to process large drafts of Billandri – based Merino wether lambs at Katanning.

“Performance-based genetics have enabled us to feedlot finish our Merino wether lambs to optimum WAMMCO criteria and two large drafts will be shorn here and sent to Katanning ready for the WAMMCO plant re-opening at the end of July,” Roger said.

“They are expected to return a top price per head, together with a further $30 or so for the wool – replacing our previous, long standing market reliance on the live sheep export trade and in turn, the store lamb market.

“Also in focus, now that we can achieve feedlot gains with Merino lambs that were not possible ten years ago, will be the question of need for separate Merino and crossbred lamb systems in the farm production program.” Roger Bilney said.

About 25 percent of the Merino ewe flock are mated to Poll Dorset rams.

“Our relationship with WAMMCO is critical to developing a systems approach for our livestock operation. We now know the exact exit strategy for the wether lambs before they are born. This certainty provides us with clarity of purpose for both breeding and feeding.”

“Maintaining viable lamb and mutton prices - currently allowing returns to test incomes generated by cereal and oilseed crops, with less risk to operating capital for the producer, will also be essential to prevent the further erosion of WA’s flock numbers.”

When the family opted to shift from traditional Merino to performance based genetics in both Merino and Poll Dorsets , it also went from a 50/50 cropping/ sheep enterprise to a 70/30 ratio in favour of cropping .

“Our demand for more sheep increased with our purchases of farming land, and though sheep and lamb production has fallen to a 30 percent share of the business, we are still running many more sheep at a lower stocking rate than when the balance was 50/50. We have slowly reduced our expectations when planning winter carrying capacity by something around 1.5 DSE per winter grazed hectare in the last 15 years. That which was 12 DSE is now more likely to be 10.5.

The Bilneys believe breeders of high fertility sheep will be under increasing pressure to improve survival rates within their flocks to capitalise on the high birth rates.

“These sheep are now incredibly fertile but we need to find better ways of keeping more lambs alive,” they said.

“We brought the annual lambing forward by two weeks this year and expect to make a further adjustment next year by shortening the duration of lambing,” Matthew Bilney said.

The family is also keeping a close eye on environmental issues arising within its management program.

“In past years we were warned that continuous cropping would damage the landscape. Today, overgrazing is probably a greater threat,” Roger Bilney said.

“One of the advantages of growing a farming business in your home territory rather than looking for ‘greener pastures,’ is that you better understand capacities and vulnerabilities where you are.”

Roger Bilney and his brother Geoff took over ‘Forts Valley’ from their parents Arnold and Marie in the 1980’s and went on to develop a major partnership, divided in 2001, but still centred on Kojonup. That evolution continues today as the business works towards accommodating ageing parents, adult sons and a growing number of children.