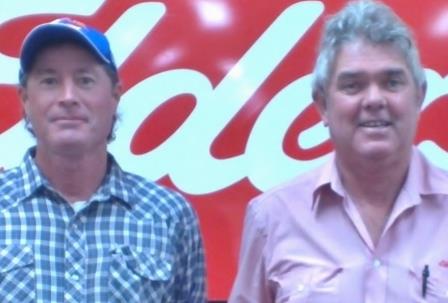 A line of 117 ram lambs culled in March by classer Kevin Broad from their Northwich Poll Merino stud, went through to win WAMMCO’s May 2015 Producer of the Month title for the Kellys.

Sharing the task of cleaning up unwanted weeds from summer rains, the winning lambs were topped off on a light ration of hay and lupins through self feeders. They dressed out at WAMMCO Katanning at an average of 22.77 kg to return $122.30 per head with top animals at $156.60. It was their first WAMMCO title.

Scott said his good recent lamb prices were on top of a $100,000 cheque for 70 bales of wool and around $100 per head for a line of export hoggetts. Offerings of ewe hoggets each year have also been popular with graziers.

“The sheep returns have actually beaten some of our cropping figures this season , with the bonus that the flock has also done a good job of tidying up some weeds both from summer rains, and on some new property we leased at Bindoon,” he said.

Mating was increased to 2,200 poll Merino ewes last year to cover the extra land and weed control, but Scott expects to stabilise at around 2000 ewes each year, split between just over 7,000 hectares on the Wongan and Bindoon properties. Black Angus cattle have also been introduced at Bindoon.

Running Merinos was a tradition that grew from Dave Kelly’s early career as a shearer and led to him taking up land at Wongan Hills with his brothers Brian and Peter in the mid-1960’s.

He founded the Northwich poll Merino stud on Pollville genetics from South Australia in 1971 with the aim of breeding large framed sheep that were suited to a northern wheatbelt environment. Poll rams from the stud are a feature of the multi-vendor ram sale held in Wongan Hills during September.

“The focus for many years was on a suitable wool type for the environment but we certainly moved further in favour of more frame and meat as the wool market collapsed,” Scott said.

He has seen farmers in the region transfer their disappointment in wool to breeds of meat sheep such as SAMMS, Dohnes and Dorpers but not many have carried through.

“Local involvement with sheep is still on the decline, particularly as fathers retire and hiring labour becomes too expensive,”Scott said.

Lamb drafts for WAMMCO as well as ram, hogget and other sale transactions are generally organised by local Elders agent Jeff Brennan.

As father Dave prepares to retire, Scott’s twin 20 year old sons James and Kristan have taken jobs in the mining industry for experience their father hopes will assist them in future life on the farm.

Scott believes WAMMCO has done a good job of keeping WA’s lamb industry viable and sees increasing competition for the product as a major challenge.

“It could be time for WAMMCO to put some pricing pressure on our hogget,” he said.