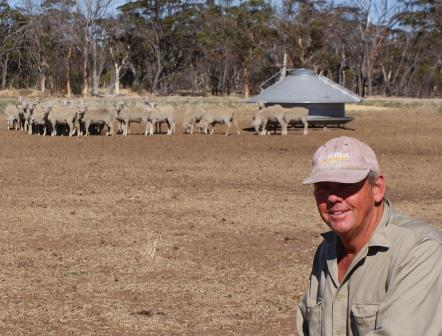 This seasons’ much tougher conditions have impacted heavily on lamb weights, demanding a high feeding regime to reach their minimum liveweight target of 56 kg.

The Crossley family were therefore surprised to learn they had won WAMMCO’s Producer of the Month title for February 2018 title with a line of 100 SAMM /Merino cross lambs from their feedlot.

The Crossleys had battled to get weight into their winning consignment, before it was processed at Katanning on February 16 to average 22.98 kg per head and return $142.62 per head including skins. WAMMCO’s ‘sweet spot’ criteria applied to 98 of the 100 lambs.

Another draft from the feedlot is due at Katanning for processing in March.

They said seasonal conditions over the past two years closely mirrored the ‘good’ season of 2010 followed by the ‘bad’ of 2011 when the Woodanilling couple won their first WAMMCO titles for April 2010 and May 2011.

Commenting on their 2011 win, they attributed WAMMCO’s high price per kilo at the time to maintaining a high return per head, despite a drop in average weights of around 4 kg per head because of the tough conditions that year.

The basis of their lamb production has changed little since they purchased SAMM rams from Rocco de Bellis ‘Gracefield’ stud at Katanning (since purchased by Peter Kerin and now operated by his sons Matthew and Simon) and a line of local AMS ewes from Peter Eckersley and Jamie Dare after quitting their Merino flock in 2000.

One departure last year was that they purchased a line of 175 older Merino ewes pregnancy tested in lamb with twins in August , from a brother’s MPM commercial flock at Cartmeticup.

“The draft was one of the cheaper lines at auction and it averaged better than 120 percent lambs,” Phil said. “We still have the MPM ewes but decided to quit the lambs on the advice of ourr wool classer.

“We sold some of our SAMM ewe lambs to make room for the purchase , but Helle (a bookeeper in Denmark before migrating to Australia ) decided to analyse actual returns from wool and lamb, based on the improving wool market. She found that whereas the Merino wool returns were higher, SAMMs countered the value with higher wool production per head.”

The base ewe flock of 1300 head still consists of just over 500 pure SAMM ewes and 550 Merinos, with outside purchases depending on price and season.

“As smaller producers we are depending more than ever on our sheep. Our decisions are therefore critical and the excellent lamb market stability provided by WAMMCO is paramount.”

Phil said he was pleased to hear that skin values had also begun to stabilise and improve since WAMMCO CEO Coll MacRury had combined the cooperative’s global skin marketing operations at Katanning and Goulburn.

All sheep, including lambs, were shorn in October.

Any decision to shear lambs outside the annual October shearing, were based more on blowfly control and production management , than on any increase in the value of their wool or their pelt.

The Crossleys have harvested proven sub-clover seed (of unknown varieties) from their paddocks this season for the first time in six years.

“We do not realise the value of our clovers until we try to do without them. It is better to re-seed than to be sorry,” Phil said.

The couple are concerned that adverse decision-making on rural education by WA’s new government has clouded the future of Muresk, where their 23 year-old daughter Ulla is completing an agribusiness degree.

“How can our young people sign on for a career in agriculture if the learning avenues they need are shut down?” she asked.

Their 21 year-old son Mitchell is one year away from qualifying as a heavy diesel mechanic with CLAAS in Katanning.