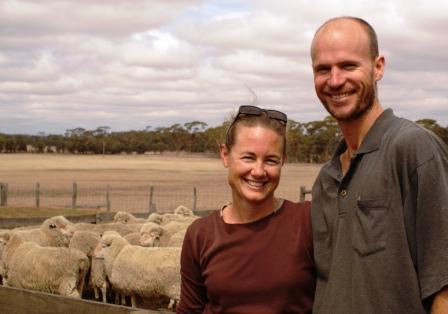 The family, which consists of Barry and wife Sandra, Damian and wife Penny and three children Shaun 8, James 5 and Emma 1, were first time winners of WAMMCO’s Producer of the Month, taking the title for February 2013.

Their line of 109 Suffolk/Merino lambs was drawn from properties near Woodanilling and was processed at Katanning on February 21.

The now-discontinued WAMMCO Select bonus, based on lean meat yield, would have applied to 46.8 percent or 51 lambs in the draft.

Damian said the family sheep enterprise was based on a flock of Collinsville blood ewes with 60 percent mated to East Strathglen Merino rams and 40 percent to rams from Bob O’Toole’s Suffolk stud at Katanning.

“We have been long term clients of both studs and we have stayed with Suffolks because they are reliable, versatile and cost efficient.

“Some studies may show that the time a farmer spends managing sheep is proportionately greater than the returns sheep can generate.

However we were increasing our crossbred matings until about five years ago and now believe that our returns from lamb, wool and sheep more than justify the time we spend on them,” Damian said.

Suffolk ram mating is carried out separately on the two properties in December and January with the three week break assisting management at lambing time.

Wheat, oat, barley and canola crops account for half of the farms each year and follow a three year crop/pasture rotation.

Lamb and grain prices, as well as seasonal conditions, determine the extent of feedlotting each season.

“We normally aim for a 48 kg lamb, but our lambs were feedlotted to 50 kg last year to capitalise on the premium prices then available.

“Lower lamb and higher grain prices resulted in a turnoff of lighter lambs this season and the February 21 draft would have been about four weeks in the feedlot before delivery to WAMMCO,” Damian said.

He said weight and grade sale of lambs to WAMMCO was the family’s preferred selling system with relatively few going into the saleyards.

Damian said political interference in the live sheep market was having the worst impact on WA’s sheep flock recovery.

“With sheep and lamb prices back so much we have already lost many farmers who may have considered returning to sheep or increasing their numbers.

“The current low price signals are the wrong ones for most farmers and unless there is some sign of improvement soon, many more producers will be bailing out of sheep,” he said.